In this bulletin, Andrew Flower considers the different ways that Chinese herbs can be classified and how this can help with understanding their effects.

In the world of Chinese herbal medicine there is an interesting debate going on about how we define the actions of a herb. In the UK there is an increasing emphasis on the ‘taste’ of a herb. Whilst this can be an excellent way of learning about the action of a herb it also has its limitations. This article describes some of the pros and cons of this approach and proposes that we utilise several different means of characterising a herb to optimise our treatments.

In Chinese herbal medicine the taste of a herb is seen as an important way of describing its therapeutic impact.

There are 6 tastes, each of which has a specific effect on the body:

Tasting can be an excellent way of ‘getting to know’ the nature and actions of a herb. At the White Crane Academy (WCA) for each herb that we introduce we try to provide a sample and we encourage students to taste the herb as part of the educational process. Every lunchtime Clare Mulligan, one of our teachers, talks students through a guided meditation on a single herb to explore the impact of the taste, the quality and directionality of the herb, and the kind of effect the herb has on the body. Students enjoy this and it is a welcome break from the drier more rational approach we take for the rest of the course. However, whilst it is a good way to ‘meet’ the herb it is also an extremely subjective and in many ways unreliable way of characterising a herb. We commonly find it difficult to perceive the tastes attributed to a herb in the Materia Medica whilst other tastes seem to come through more strongly. It is also apparent that different students describe the herbs in different and frequently opposing ways. It could be argued that these are naïve palates and there will be consistency and reproducibility in more mature herbalists but I would like to see some proof of that. It’s not difficult to set up a double blind tasting test for the herbs and I would be interested to see how ‘experienced tasters’ fared in terms of accuracy, consistency, and reliability.

Those who foreground the importance of taste in defining a herb often cite the case of wine. I think it was Julia Nugent-Head who reported the huge variability in the taste of a wine grown in the same region in two different years and used this as an example of the variability of plant based products which are affected by climate, soils, farming and harvesting methods. However, in the case of wine, whilst variability of taste and flavour is absolutely paramount when it comes to our aesthetic pleasure (and its commercial value) it is fairly irrelevant when it comes to its pharmacological action. This is determined predominantly by its alcohol content…and as anyone who has been a student will attest a £3 bottle of 12% alcohol wine that tastes of vinegar has much the same effect as a £30 bottle of 12% alcohol wine that tastes as if it has been made for the gods.

So in this case, sadly, from a pharmacological point of view, taste is trumped by a largely tasteless active ingredient that is easy to identify, quantify, and standardise-namely alcohol. Now that does not mean that taste has no relevance to herbal medicine. It definitely does and it should be studied and reflected upon. However I think it is important that when we try to characterise a herb we broaden our range of references and use as many means as we can to add depth and precision to our understanding of the clinical value of a herb.

The White Crane Academy diploma course is supplemented with online lessons – take a look at our module on Huang Qin here.

At the introductory lecture at the WCA we present 9 ways in which herbs can be characterised. Each of these approaches provides a different system, or code, that can be used to classify and describe a herb in order to give pointers as to how this herb could be used. These ‘codes’ have developed as a consequence of using herbs over thousands of years and include insights derived from empirical observation of the effect of a herb, subjective and intuitive explorations of the Qi and taste of a herb, and in more recent years more objective and systematic scientific investigations. They include:

Most acupuncturists are familiar with the importance of the temperature of foods and herbal knowledge is an extension of this. In some cases such as when we require warmth to alleviate Cold this can be the primary determinant in our choice of herbs. In other instances it is less important, for example in the Phlegm-Heat resolving formula Qing Qi Hua Tan Wan, cooling herbs such as Huang Qin and Gua Lou Ren are used with the warming Ban Xia. In this case the phlegm resolving properties of Ban Xia trump its warm temperature. 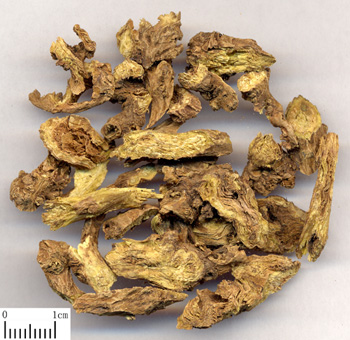 An account of the channels a herb enters, and which organ systems it subsequently influences, is by Chinese medicine standards a relatively recent addition to the Materia Medica (12th century!). It is one of the more controversial and variable methods of characterising a herb but it is a useful way of linking a herb with the Zang Fu organ and acupuncture channel systems. It can facilitate a more precise differentiation and selection of a herb. So, for example, amongst the clear Fire toxin herbs, Pu Gong Ying enters the Liver and Stomach channels, which makes it a particularly useful herb for Hot toxic conditions of the breast. Similarly Lian Qiao enters the Heart channel which makes it a useful herb to apply when treating urinary tract infections where Heart Fire is an important pathological factor.

In other cases the directionality of a herb takes on a more important aspect. This could be the ability of Huai Niu Xi to move blood in the lower limbs of the body, or the ability of the combination of the rising Jie Geng and descending Zhi Ke to restore the natural circulation of Lung qi in the treatment of a cough.

Pao Zhi describes the various ways in which a herb can be processed to alter its therapeutic impact. ‘Chao-ing’ a herb by stir frying it brown may modify the coldness or the harshness of a herb, and the addition of tastes such as honey, salt or vinegar can have a major impact on what we use a particular herb for. However change in taste is only one way of regarding this transformation. It has become increasingly apparent that the materials we use in Pao Zhi are acting as solvents to extract compound which may be poorly released in water. It has been shown for example that using vinegar in the preparation of Yan Hu Suo can lead to over 40% increased availability of the known pain relieving alkaloids alkaloids in this herb (Bensky).

All the herbs we use in Chinese medicine are characterised by a record of their actions and indications. However it is worth stating the obvious that herbs with similar tastes can have completely different actions. Zhi Shi and Ban Zhi Lian are both Bitter, Pungent and Cool but in the former the tastes relate more to their effect on regulating the Qi whilst in the later these actions occur within the domain of eliminating Fire toxins. This is not to say that these tastes are not relevant-they certainly are-but in this case they are rightly secondary to the recorded action and indication of the different herbs.

The empirical use of a herb is an interesting and important category. I think there is evidence to support the idea that reports of the empirical actions of a herb precede later attempts to codify it using concepts like taste, temperature and channels. For me this is a connection to the ancient past of herb use where knowledge was accrued by generations of trial and error based on careful observation and a degree of experimentation. However this process did not stop 2,000 years ago, it is ongoing and continues to be priceless. Examples include the use of Bai Jiang Cao for appendicitis, or Lu Lu Tong for allergic rhinitis. In some instances these actions are consistent with their tastes and temperatures in others they are not. I don’t even know the properties of Xue Zhi Kang-red yeast rice-but I do know that it reduces blood cholesterol levels. In this instance the taste of herb is trumped by the fact that a) it has an active ingredient Monacolin K that has the same molecular structure as the drug lovastatin and b) that it can be clearly observed to work in clinical practise without requiring a sophisticated differentiation of disease or syndromes.

A proper discussion of the pros and cons of using in vitro, in vivo and clinical research is a complex subject that goes beyond the scope of this article. In some cases it may have limited relevance to clinical practice. I can cite papers where a herb like Bai Hua She She Cao is said to antagonise a chemotherapy regime and others where it has an agonistic effect.

Similarly, if you believe the in vitro hype about a herb, then killing cancer cells, or laying waste to drug resistant bacteria is a piece of cake. This may be true in a test tube or a petri dish…but it is a little more difficult to realise in a real life patient with Stage 4 lung cancer. However in other instances research can be really useful and may extend our understanding of how a herb may work and what it is capable of.

In recent years I have enjoyed reading Yair Maimon’s reports of the cytotoxic effect of Nu Zhen Zi in breast cancer (Cohen 2015) or the effectiveness of the combination of Ling Zhi, Ku Shen and Gan Cao in treating allergic asthma and helping to regulate a dysfunctional immune response (Li and Brown 2009). In my own research we used a disc diffusion assay to compare the antimicrobial effects of Huang Qin and Huang Bai against E Coli-the most common bacterial cause of UTIs. Although Huang Bai is traditionally indicated for more lower jiao disorders it was Huang Qin that had a far more marked antibacterial effect. Whilst I retain a healthy scepticism about this kind of research it has altered the way I prescribe for patients with urinary tract infections.

Botanical classification is the category that I am weakest on. Chinese herbs are rarely grouped according to their Family and Genus. However discussions with Western herbalists and botanists suggest that this could be an important way of identifying some of the positive and negative attributes of a herb. In the UK we have a voluntary ban on Xi Xin, not because we have had any reports of adverse events from this herb but because it is a member of the Aristolochiacea Family.

In conclusion, whilst I respect the importance of taste and welcome the subjective insights, clarity, and depth it can provide for understanding a herb, I think it is important to acknowledge its limitations. It would be a big mistake to neglect the other means we have at our disposal to characterise a herb that involve recorded empirical experience, traditional theory, and modern science. The challenge is to learn as much as we can about all of these approaches, and others that I may have unintentionally excluded, and to integrate and synthesise these disparate sources of information so that we can make the right choice of herb that will deliver the optimum clinical effect.